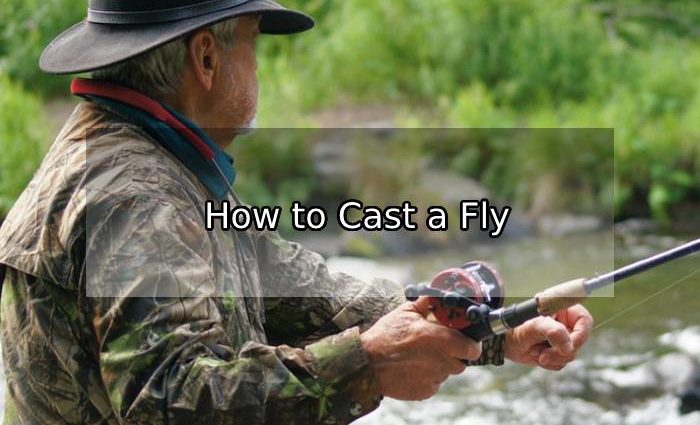 How to Cast a Fly

Casting the fly is a matter of timing, not strength. Many beginning fishermen use more force than necessary, which results in a sloppy and less accurate cast. Casts should be as short as possible: in most freshwater fishing, you can approach within 50′ of the fish, so long casts are usually unnecessary and ineffective.

The following casts are used by all fly fishermen. To practice them, mount the reel on the rod, pass the line through the guides (but not through the hook-keeper, a small metal loop often placed about 1″ from the cork grip), attach a short leader, and tie a small piece of brightly colored yarn to the end of the leader to simulate a fly. Next, straighten the leader by pulling it through the leader straightener or stretching it hard: stretch 20′ of the line to remove any coils. Go out into your yard, lay 20′ of line on the lawn stretched in front of you, and then begin to practice.

Hold the rod in your dominant hand (called your rod hand; the other is your line hand), as shown below. Keeping your thumb on top of the cork grip allows you to apply pressure during casting. Modern fly casting uses very little movement of the wrist: this grip helps keep your wrist locked.

The roll cast keeps most of the line in front of you, which is valuable when fishing in tight quarters. You can’t practice this cast on grass—it needs the water’s resistance to work properly.

The false cast is much like the overhead cast, only the line doesn’t actually touch the water. This cast is used to dry a fly off, lengthen the line, or determine accurate placement of the fly. You might make two false casts before making the final delivery cast.