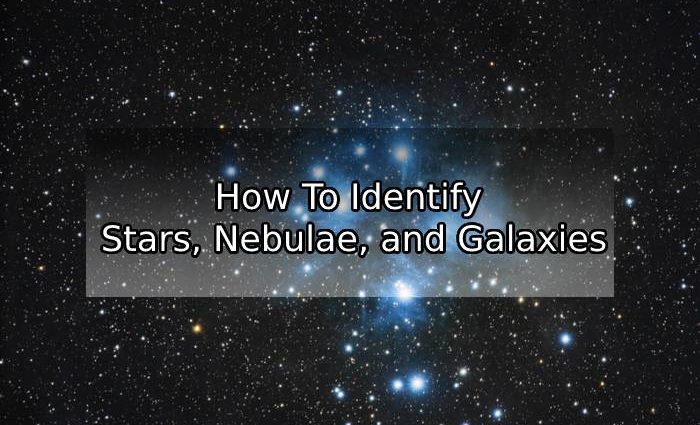 How To Identify Stars, Nebulae, and Galaxies

The objects you can see in the sky with your naked eye are mostly stars and sometimes planets, but with binoculars or a telescope, many other types of objects become visible. That being said, if you just have a small, basic telescope, don’t expect to see a lot of spectacular detail and colors—most of the published photographs of beautiful, multi­colored deep-sky objects were taken with the Hubble Space Telescope or by professional observatories.

Stars are large balls of burning gases, like our Sun, for example. They can have different colors depending on their temperature (hotter stars are whitish-blue, cooler stars are red, and intermediate stars can be orange or yellow).

Double stars are pairs of stars that appear to be very close together. Sometimes this is an illusion, and one star is actually hundreds of light-years behind the other. Other times they are binary stars that orbit around each other.

Open clusters are loose aggregations of stars that look like several individual stars in close proximity.

Globular clusters are aggregations of hundreds of thousands of stars so tightly concentrated that they look like a continuous patch of light.

Planetary nebulae are glowing regions of gas that have been ejected from a dying star. They look like faint, irregul­arly shaped, fuzzy smudges, some of which are ring-shaped.

Diffuse nebulae are large regions of gas where new stars are in the process of forming. Like planetary nebulae, they look like fuzzy splotches.

A galaxy is a system of billions of stars spin­ning around a glactic center (where there is often a black hole). Through a small telescope, most galaxies look like fuzzy circles or ovals (or fuzzy lines if seen edge-on), but some have visible spirals.

The Milky Way is our own spiral galaxy—we are located in a spiral arm about two-thirds of the way out from the galactic center. The plane of the galaxy’s disk looks like a bright band across the sky, stretching from horizon to horizon. This part of the Milky Way looks brightest because it’s where most of the galaxy’s stars are located.

You can find the locations of many more stars, clusters, nebulae and galaxies with a detailed star or the online Messier Catalog. (For more resources, see Stargazing Resources.)

2021-06-07
Previous Post: Moon Gazing: What It Is, How to Do It
Next Post: What Tools to Bring for a Night of Stargazing