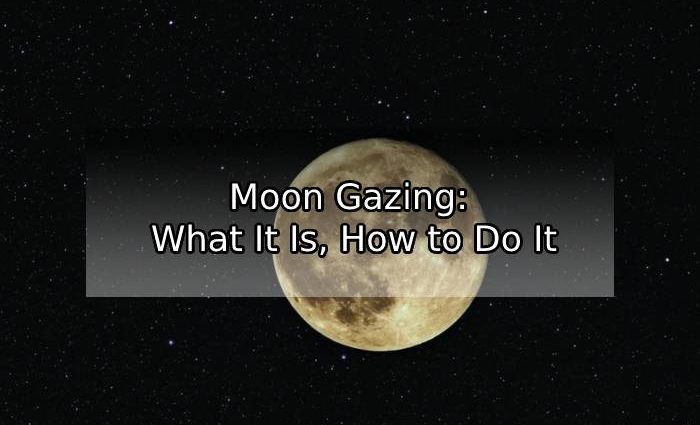 Moon Gazing: What It Is, How to Do It

Many of the Moon’s surface features can be viewed with the naked eye because it is often the largest and brightest object in the night sky. Whether through binoculars or a telescope, it’s one of the most fascinating celestial bodies to see.

The Far vs. Near Side of the Moon

Because the Moon’s orbit is locked to that of the Earth, the same side of the Moon—the near side—always faces the Earth. The far side of the Moon has only been seen by a few humans (for example, the astronauts who orbited the Moon for NASA’s Apollo Program). The rest of us are continually looking at it from the side. Because the Moon wobbles a little in its orbit (a phenomenon known as libration), astronomers can see up to 59 percent of the Moon’s surface in a month.

Lunar Phases and When to Moongaze

In the night sky, half of the Moon (the side facing the Sun) is always bright, while the other half is generally dark. Earthshine can sometimes make the dark side of the Moon visible (sunlight that bounces off the Earth and hits the Moon). In a 29.5-day cycle, the sunlit face passes around the near side of the Moon, resulting in various lunar phases at different times of the month. When astronomers talk about phases, they employ a few key terms:

Make sure you know the current lunar phase before you want to moongaze on a particular night. A Full Moon is actually a horrible moment to look at the Moon’s features. Craters and mountain chains (see “Moon Features” below) are most visible near the terminator (the line where the lit side of the Moon meets the dark side), therefore Quarter and Gibbous Moons are the finest times to see the Moon. You can use the table below to anticipate the phase if you know when the last New Moon was:

Features of the Moon

Even if you stare at the Moon with your naked eye, you can see that there are two types of surfaces: bright ones (highlands with craters) and darker ones (plains without craters) (lowlands, which are filled with smooth, dark, volcanic rock). Some people believe the “Man in the Moon” is a group of valleys that form the eyes and mouth of a joyful cartoon face. You can view additional features in great detail with strong binoculars or a small telescope:

2021-06-07
Previous Post: The Planets – The Brightest Objects To Stargaze In The Sky
Next Post: How To Identify Stars, Nebulae, and Galaxies