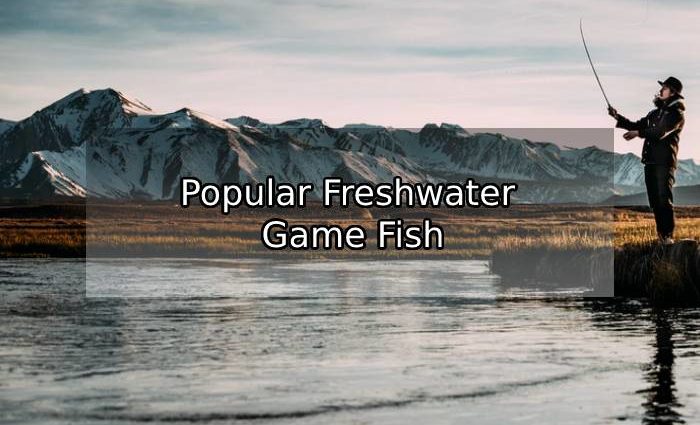 Depending on where you live and the type of water in which you plan to fish, different types of game fish will be available for you to target. Following are a few of the most common freshwater game fish in the United States, along with a few basic guidelines on how to catch them.

The largemouth bass, also called the black bass, is arguably the most popular freshwater game fish in the country and can be caught in every state in the continental United States. As its name suggests, the largemouth is distinguished from other species of bass by its large jaw, the corners of which extend past its eyes. When it opens its jaws, the largemouth uses its huge mouth to haul in prey, earning it the nickname of bucketmouth. A largemouth can also be distinguished by its greenish skin, which ranges from light in shading to almost black. It also has a broken black streak along its lateral line on both sides of its body.

Largemouth bass typically live in areas with shallow, slow-moving water, often in depths of less than 20′. They like to ambush their prey, so they hide in dense weeded areas, around lily pads, and near logs.

The largemouth’s diet consists of just about anything, from insects and small fish to frogs, mice, or anything that can fit in its mouth. Use topwater poppers and plugs along the shoreline or in weedy areas. Largemouth love plastic worms fished slowly along the bottom, and they will hit any kind of crankbait or spinner bait. They also devour live minnows.

Not surprisingly, smallmouth bass differ from largemouth in that their mouths are smaller. They also have different coloration, ranging in hue from bronze to dark brown. Smallmouth bass are generally found throughout the Northeast and Midwest, with healthy populations as far south as Tennessee and Arkansas.

Smallmouth bass like cool, clear, quiet water. They tend to hang around rock or gravel river bottoms or in pockets of cool, shady water near drop-offs or ledges in lakes.

Smallmouths respond very well to live minnows and crayfish. They rarely hit on the surface, so fishing deep swimming baitfish lures or spoons is a good bet. They also love soft plastic tube baits, which are similar to plastic worms.

Walleye are some of the most prized freshwater game fish, due to their excellent quality as table fare. They are long and slender with greenish skin. They also have prominent canine teeth in their mouth and unusual, cloudy eyes (due to a pigment that helps them see in low visibility conditions). Walleyes, which typically grow 1–2′ long, are found predominantly in the Northeast and Midwest.

Walleye live in cool, clean water, typically in large lakes. They usually can be found hanging close to the bottom in rocky or sandy areas, typically at depths of 20–60′.

Walleye are light sensitive and are most often caught at dawn and dusk, which are their peak feeding times. They feed primarily on smaller fish. They can be caught by dropping down live minnows or crayfish, by trolling lures behind a boat, or by dropping jigs down to them vertically.

The three most common types of trout are the rainbow trout, brown trout, and brook trout. (The brook trout is actually a char, related to the salmon, but it’s usually grouped with rainbows and browns nonetheless.) Trout are cold-water species that typically live in fast-moving rivers and spring-fed creeks, streams, or ponds.

They require cold, clean water to survive. They are found in cold-water areas across the continental United States and can be found in several mountainous regions in the South. The rainbow trout is noted for its silvery skin with pink coloration and the tiny black dots that run the length of its body.

The brown trout has yellowish skin with large orange, red, and black dots on its body. The brook trout has bluish-brown skin with many brightly colored yellow, blue, and red dots. Large males often have an orange underbelly.

Trout often hide along the banks of rivers and streams, in deeper pools and eddies, or behind rocks and other structures on the down-current side. They can be found in cold, well-oxygenated water in lakes and ponds. They prefer water in the 55–65°F range and cannot tolerate water above 75°.

Trout feed primarily on insects, both aquatic and terrestrial. They will hit worms, minnows, and other live-bait options, such as grasshoppers, beetles, leeches, grubs, maggots, and fish eggs. They will even eat pieces of corn. Trout will also hit small spoons or lures that look like baitfish. One of the preferred methods of fishing for trout is fly fishing—catching a fish using a fly rod with lightweight “flies” tied on to hooks to resemble various insects.

The northern pike is known as the water wolf for its voracious eating habits. It is usually one of the largest fish in the area and is often at the top of the food chain. Pike have long, slender, torpedo-shaped bodies designed for short bursts to ambush prey. Due to their very sharp teeth, they must be handled with care. Pike have olive-colored skin with yellowish dots along their bodies and are found in the Northeast and throughout much of the Midwest.

Pike prefer slow-moving water with thick vegetation. They can also be found along ledges and drop-offs; along points of land that jut out into the water, typically in a river; or hiding in areas with lots of underwater structures.

Northern pike will eat almost anything that swims into their vicinity, including other pike. They are territorial ambush predators and will wait for something to come past them. Try fishing along weed beds, ledges, and shoreline structures. Keep moving and cast into many different places until you find a pike. Because pike have sharp teeth, tie in a piece of wire leader between your lure and fishing line.

In any body of water it inhabits, the muskellunge is the apex predator. It is related to the northern pike and has similar habitat and feeding characteristics. Because muskies are at the top of the food chain, there are far fewer of them than other fish, and they’re very difficult to catch—catching even one is a big accomplishment. The muskie’s skin is brownish with silver and green highlights and a broken stripe pattern (in contrast to the northern pike’s dotted pattern).

Muskies prefer larger bodies of water with cool, clear water. They are found throughout the Great Lakes and the St. Lawrence River system, as well as in several lakes in Wisconsin, Minnesota, and Michigan. They can be found sporadically in freshwater systems as far south as Tennessee.

Muskellunge are very difficult to find and fool, but anglers have been known to catch them on simple worm rigs. In general, muskies respond best to lures 8–12″ in size, either cast or trolled behind a boat.

Of the several different species of catfish, the most commonly fished for are the channel catfish, flathead catfish, and blue catfish. They are found throughout the United States but are most abundant in warm waters in the South. Catfish are bottom-feeders and have wide, flat mouths and whiskers. The channel cat has a forked tail and gray skin and prefers deep, moving water. Blue catfish also have a forked tail but much darker, blue-colored skin. They prefer shallow, fast-moving water. Flathead catfish are brown in color with a square tail and prefer slow-moving or still water.

Catfish are scavengers and bottom-feeders, so the best way to catch them is to drop a bait to the bottom and let them find it. Catfish are scent oriented, so pungent baits will attract them. Anglers have great success catching them on chicken livers and hot dogs.

Carp are not very popular to eat in North America, but many fishermen consider them to be a premier game fish. They are certainly some of the hardiest fish around and can survive in almost any type of freshwater habitat in the United States, though they prefer slow-moving rivers or warm-water lakes and ponds. The common carp is bright yellow or gold in color, with large, visible scales. It has a rubbery mouth with barbels on both sides.

Omnivorous bottom-feeders, carp use their rubbery mouth and barbels to root through the muck of soft-bottom areas or gravel or sand beds. They tend to congregate in shallow areas where they can search for food along the bottom.

The most popular way to fish for carp is to make dough balls out of bread or cereal and mash them onto a hook. Carp search for food by sight and smell and are very leery of hooks: if they feel a hook in their mouth, they will quickly spit it out. The trick is to conceal the hook in the dough ball and to set the hook before the carp notices it.

Panfish is a popular term to describe a loose collection of smaller fish that easily fit into a frying pan—hence the name. The three most popular panfish are yellow perch, bluegill, and sunfish. Yellow perch are related to walleye and make great table fare. Bluegill and sunfish are related to largemouth bass. Because they’re easy to find and often gather in large schools, all three are excellent for teaching children how to fish. Once found, they’re easy to catch and handle.

The yellow perch can be found in lakes, rivers, and ponds in the Northeast and Midwest and south to Missouri, Kansas, and South Carolina. It has yellow-green coloring with dark green vertical bands along the length of its body and orange fins. Bluegill and sunfish are found in rivers, lakes, and ponds throughout most of North America.

They are usually dark blue with speckles of yellow, red, and light blue, with dark vertical bands along the sides. There are several different types of sunfish (called bream in southern states), but the most common is the pumpkinseed, which has multicolored skin with patterns of blue, green, and orange. It also has a black marking on its gill plate, the flap that covers and protects the fish’s gills.

All three types of panfish will hit almost any live or dead bait as well as small lures. Once you find these fish, simply suspend a worm just off bottom and wait for one to bite, which usually happens quickly. Once you locate a school and catch one fish, chances are you’ll be able to catch many more.