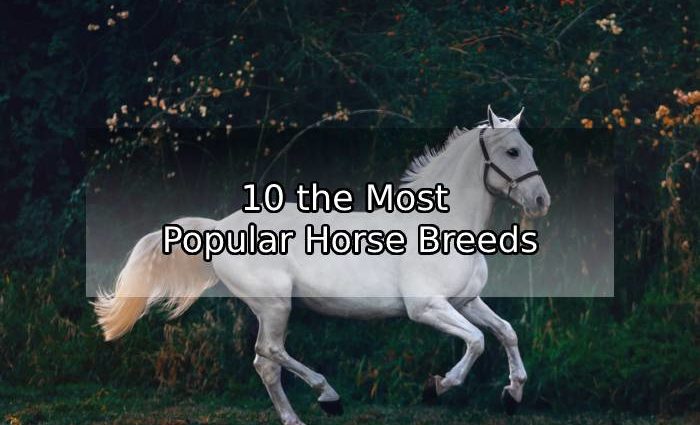 What are the Most Popular Horse Breeds?

Your riding instructor may also ask you to retrieve your horse by breed. Some horses are used primarily for driving; others are more suitable for riding. In all likelihood you will be introduced to one of these horses:

Most Appaloosas have spots in different patterns covering the body. They may have a sparse mane and tail, and their hooves may be striped. The breed originated during the 1700s, when the Nez Perce tribe of the Pacific Northwest selectively bred descendants of Spanish horses to create the breed.

Arabians have a refined body, arching neck, and large nostrils, and have one less vertebra than other horse breeds. Many myths surround how the Arabian came to be, but it’s generally accepted that nomadic tribesmen of the Arabian Desert, called Bedouins, bred them selectively to create a refined horse with excellent endurance.

Morgans are sturdy, elegant, and spirited horses with short, broad backs and deep chests. All Morgans descend from a single horse named Figure, which was owned by a Massachusetts composer named Justin Morgan in the late 1700s.

Most Paints have white and colored patches covering their stocky bodies. Spanish explorer Hernán Cortés is believed to have brought the first pinto horses to North America; Native Americans later bred them selectively to create the Paint.

Pony of the Americas

Most Ponies of the Americas (POAs) look like miniature Appaloosas. In 1954, a pony breeder bred an Arabian/ Appaloosa mare to a Shetland pony stallion, and the result was a spotted pony. Strict guidelines were set for other breeders, which resulted in the Pony of the Americas.

Quarter horses can be many colors and typically have stocky, muscular bodies. They were originally bred in the 1600s in Virginia as racehorses that could run a quarter-mile faster than other breeds. Not long thereafter, they were found to be well-suited for ranch work.

Saddlebreds have high-set heads, carry their bodies proudly, and are highly intelligent. They originated when horses from the British Isles were brought to North America and bred to create a horse suited to smooth riding.

Shetland Ponies are small, short-legged ponies that grow long winter coats with thick manes and tails. They originated on the Shetland Islands, off the north coast of Scotland.

Originally from England, Thoroughbreds are best known for racing on the track, though retired horses often find their way into riding programs. They have thin, muscular bodies. Three stallions from the Arabian desert were bred to European horses to create the Thoroughbred, which was used primarily in European racing before it spread worldwide.

2021-06-07
Previous Post: Most Common Horse Colors And Markings
Next Post: Basic Horse Care For Beginners – How to Look After a Horse