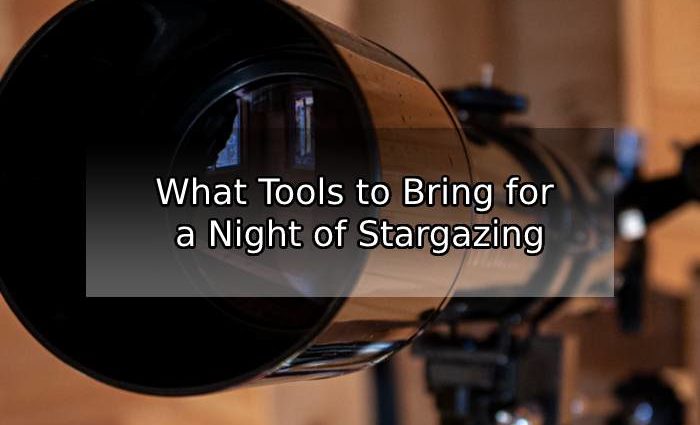 What Tools to Bring for a Night of Stargazing

A variety of tools can enhance your stargazing by helping you locate objects in the sky and see them in more detail.

Star charts are road maps for the sky: they show the locations of stars, galaxies, nebulae, and clusters, as well as directions (north, south, east, west) and degrees to help you find them. A good starting point is a planisphere, a circular map that lets you adjust the view depending on the season. There are different planispheres for different latitudes, so make sure to get one that matches your location.

How to Use a Star Chart

Star charts never look exactly like the night sky and can be confusing at first. To get used to using them, try these tips:

Star charts indicate how bright objects in the sky are, using a magnitude system. The lower an object’s magnitude, the brighter the object is, and the easier it is to find. A decrease of 5 magnitudes means a 100x increase in brightness.

Most stars and galaxies have positive magnitudes, whereas brighter objects such as planets and the Moon have negative magnitudes. The following chart lists a few objects of various magnitudes, from brightest to dimmest.

Planets don’t move with rest of the sky but instead follow the path of an invisible line called the ecliptic. As a result, you can’t depend on landmarks such as the North Star or constellations to locate them. In a given evening, a planet might be visible for all of the night or part of the night, or it might not be visible at all. Each planet is visible within a fixed schedule that may not change much over a few days but will be drastically different after a few weeks.

Planet-finding charts, found in astronomy magazines or online (see Stargazing Resources), give you a rough idea of where to find planets at different times of year. They usually will point you to the constellation nearest to the planet.

Ephemerides (singular ephemeris) are tools professional astronomers use to locate the exact positions of planets, asteroids, comets, the Moon, and other satellites. They are tables or data files containing the celestial coordinates of an object at regular intervals throughout the night. You can generate ephemerides easily online (see Stargazing Resources).

Binoculars are an inexpensive, lightweight alternative to telescopes. With a good pair, you can spot objects as faint as magnitude 10. The most popular types of binoculars used for stargazing are:

The 8×35 magnifies more powerfully but collects less light than the 7×50, so the 8×35 is not as good for observing very faint objects. High-end binoculars (so-called supergiant binoculars) range up to 20×100 or above and look more like twin telescopes than standard binoculars.

Your hands will shake when holding any type of binoculars, making fainter objects difficult to see. It’s best to prop your binoculars up on something steady, or get a binocular holder or a tripod.

Telescopes are essentially buckets for collecting light— the bigger the telescope, the more light it will collect, and the better you’ll be able to see faint, distant objects. Telescopes can be pricey, though, so before you buy one, put careful thought into which type is best for you. There are three main categories of telescopes: refractors, reflectors, and catadioptrics.

There are countless telescope accessories you can buy to aid your stargazing ventures. Some are absolutely necessary, and others are essential only for professionals.

Telescopes can be tricky to use, and it takes a lot of practice to become completely comfortable with them. You’ll be at an advantage, though, if you remember a few tips: