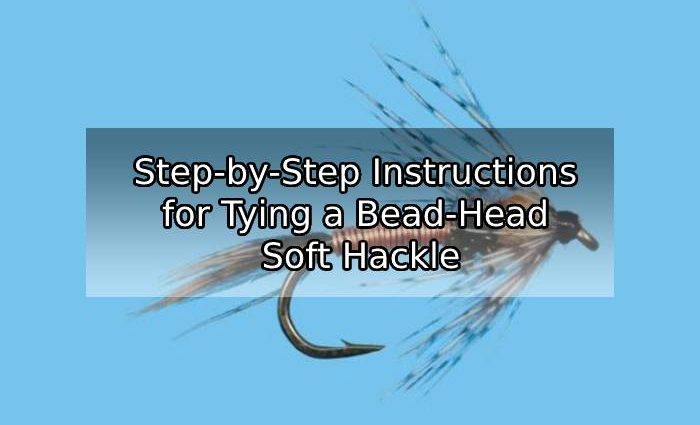 The Bead-Head Soft Hackle is a cross between a 100-year-old Yorkshire soft-hackle wet fly pattern and the modern bead-head nymph. Beads, made from glass, brass, or tungsten, have been added to every popular nymph pattern over the past few years. They add sparkle and weight without having to tie lead wire under the fly or use split shot on the leader. Tungsten beads are the heaviest, brass are about 50% lighter, and glass beads are the lightest.

Using what you learn in this guide, you can tie either regular soft-hackle wet flies or bead-head nymphs. Soft-hackle wets are usually tied with bodies of thin floss, very sparsely dubbed fur, or feather fibers such as those from pheasant. The hackle is sparse—typically three turns of a soft body feather. The most common feather used is the Hungarian partridge because it’s widely available and has lifelike speckled markings. Hen chicken hackle can also be used, or if you hunt, ruffed grouse, woodcock, quail, and dove feathers make wonderful soft hackles.

If you want to turn the fly covered in this guide into a plain bead-head nymph, merely leave off the hackle in front of the bead, finishing the fly with the first whip finish. Bead-head nymphs sometimes have tails and sometimes don’t. You can make the easiest bodies from premade materials such as dubbing brushes, microchenille, or yarn. Fancier flies can contain dubbed fur, peacock herl, pheasant tail, rubber bands, or nearly any other material you can wind on a hook.

How to Fish with the Bead-Head Soft Hackle

This is a pattern that works best when there are caddis flies around. If you see caddis flies in the air or on the water, or if you see their cases covering the bottom, a Bead-Head Soft Hackle should interest the fish. If you see no rises at all, fish it slow and deep, adding a pinch of soft weight to your leader. Fish upstream, dead drift, with a big, fuzzy yarn indicator. If you see caddis in the air and a few sporadic but splashy rises, take off the weight and indicator. Fish the fly just below the surface, across and downstream.

Slip a 1⁄8″ brass bead over the hook point. You’ll notice that the bead has a wide opening on one side and a narrow opening on the other. Slip the point of the hook into the narrow end, as this makes it easier to thread the bead on the hook. Slip the bead about three-quarters of the way to the eye. Apply a drop of head cement onto the bead, letting the cement run into the hole inside the bead.

Start your thread immediately behind the bead.

Wind the thread back to the end of the hook shank, right to the point where the bend starts to angle down.

Strip the fuzzy down from the base of a well-mottled Hungarian partridge feather. Separate 6–8 fibers and line them up by pulling them at right angles to the stem of the feather. Pluck them all at once from the feather.

Measure the fibers against the shank. The fine ends should extend about half a shank length beyond the bend. Place the fibers at a 45° angle to the shank, with the blunt, plucked ends facing toward you.

Take one soft turn of thread around the tail material without tightening.

Start working the thread toward the eye in nonoverlapping turns, applying more tension with each wrap and guiding the tail fibers parallel to the shank. They should do this naturally as you wrap. Don’t let the tail fibers slip around the far side of the hook, but rather keep them right on top of the shank.

Wrap the thread back to the initial tie-in point. You can make smooth turns or just spiral it back quickly. There’s no need to wrap a smooth foundation of thread at this point. Pull the fur off about 1/8″ of a piece of dubbing brush. You’ll see twisted copper wires exposed. Tie the exposed wire in with about five nonoverlapping tight turns of thread, working toward the eye. Wind the tying thread up to the bead and let it hang.

Wind the dubbing brush all the way up to the bead. Tie it off tightly by holding the end of the material in your right hand while bringing the thread and bobbin behind the material with your left hand. When the bobbin reaches the far side, let it drop gently. Bring your left hand around the vise and apply tension by pulling straight down on the bobbin with your fingers locked against the spool so that the spool doesn’t turn. Repeat this four times.

Trim the dubbing brush, using the lower inside of your scissors so that you don’t damage their fine points when cutting the wire. If a little wire sticks up after you trim, just push it down with your finger; it’s already locked in place and won’t unwind.

Whip finish behind the bead. Let the knot dig into the dubbing so that it disappears. Apply a couple of drops of head cement.

Reattach the thread just in front of the bead.

Pick a Hungarian partridge feather with unbroken fibers. The fibers on each side of the stem should be about one hook shank long. Strip the fuzzy fibers from the base of both sides of the butt or from the heavier end of the stem by pulling down as shown here.

Grasp the feather by its very tip and stroke all the fibers back toward the butt.

Trim the fibers very close to the stem about 1/8″ down from the tip. These stubby fibers will help hold the delicate feather in place.

Tie the trimmed end of the feather just in front of the bead with five tight turns of thread. The concave or shiny side of the feather should be facing you. Work from the base of the bead toward the eye. Don’t tie the feather all the way to the eye; leave a small space so that you finish with a neat head. Leave the thread hanging here.

Grasp the heavy end of the feather with hackle pliers. Pull straight up gently and stroke all the hackle fibers back toward the bend of the hook. Always use a light touch when manipulating this delicate feather, as it breaks easily when winding.

End with the feather straight up. Tie off with the bobbin in your left hand, using four tight turns. Trim the feather very close to the hook. If you trim on top like this with your thread hanging underneath the hook, you won’t cut the thread accidentally.

Untwist your thread until it’s flat, and then wrap a single layer of thread over the head. If the hackle fibers don’t slope back at about 45° from the vertical, wind the thread back onto the hackle very slightly while pulling them back toward the bend. Whip finish and add a drop of head cement to the head.